I’m gonna let you in on a little secret about our home. It’s rather embarrassing to admit, but as organized and orderly as the majority of our house is, the basement had become our clutter-tossing zone–the zone where we just threw stuff that we didn’t know what to do with or couldn’t find a place for.

While the rest of our home looked organized, tidy, and under control, underneath it all lurked a monster that was completely out of control!

We moved from an area with larger, newer homes to an area with smaller, older homes. So a lot of our things just didn’t fit in this home and ended up in the basement.

We’re talking piles and piles of boxes and bins filled with random clutter, as well as furniture and appliances. So much stuff you could barely walk around it all! It drove me CRAZY! But since it was all in the basement, it was easier to just shut the door and pretend it didn’t exist than to deal with it. 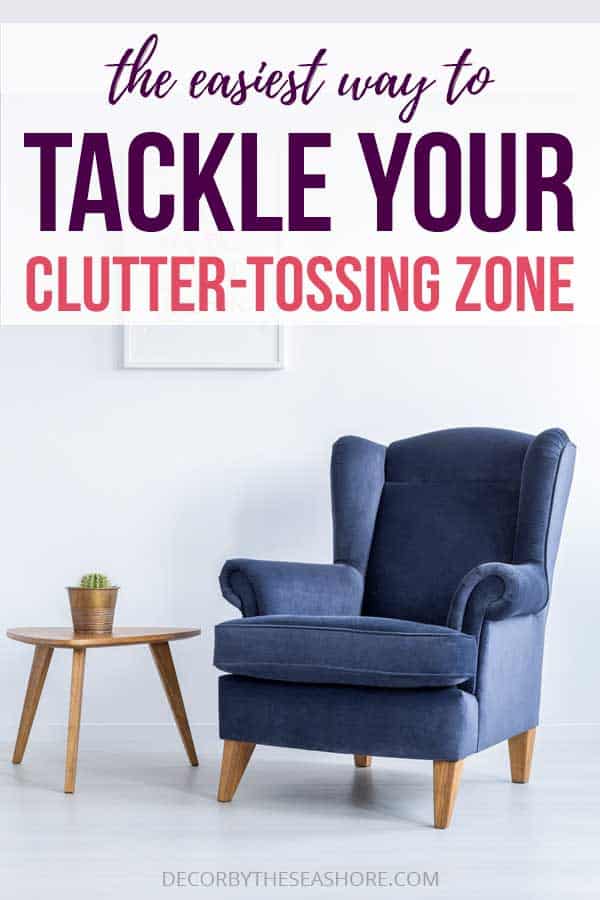 I know that SO MANY homes have a zone like this. Maybe it’s not necessarily a basement, but a closet, garage, attic, unused guest room, storage unit, or even cabinets and drawers.

It’s just wasted space filled with clutter that has no purpose–things that you don’t use or have room for, stuff that’s too nice to throw away but you just didn’t have the heart to get rid of, stuff you might use someday. You know, that sort of stuff.

It becomes a clutter-tossing zone because it’s so easy to just toss things in there and tell yourself you’ll deal with it later, and shut the door and forget about it.

The only problem with that is when you let it go long enough, it quickly gets out of control. Space is at a premium in our home, and with a baby on the way I decided enough was enough, and I was going to take control of our basement once and for all!

5 Steps to Tackle Your Clutter-Tossing Zone

Clear a space where you can sit and sort through everything so you’re not tripping over things as you’re trying to organize. Trust me when I say that having to constantly step over, through, and around piles of stuff while you’re trying to get organized will only make you incredibly frustrated, and the entire process will be much harder!

Not only that, but things you’ve already sorted will end up getting mixed back in with things you haven’t. That’s not a good way to start your decluttering!

In addition to space where you can sort through things, you should also make room to put things when you’re finished sorting through them. I recommend a separate box, bag, or pile for things you want to keep, throw away, recycle, donate, and sell. So make sure to clear a decent amount of space before you start tackling the clutter!

If your clutter-tossing zone is really large (like a basement, garage, or storage unit), the thought of weeding through endless boxes and mountains of clutter can be so overwhelming you don’t know where to start. Break it down into manageable chunks. Start with a few piles or boxes, and only focus on that one area until you’ve sorted through it all.

Another option is to break it down into time blocks. For example, set a timer for two hours and sort through as much stuff as you can during that time. When time is up, take a break. Just make sure you get back to the task once your break is up. It might even help to put it on your calendar to make sure it actually all gets done! 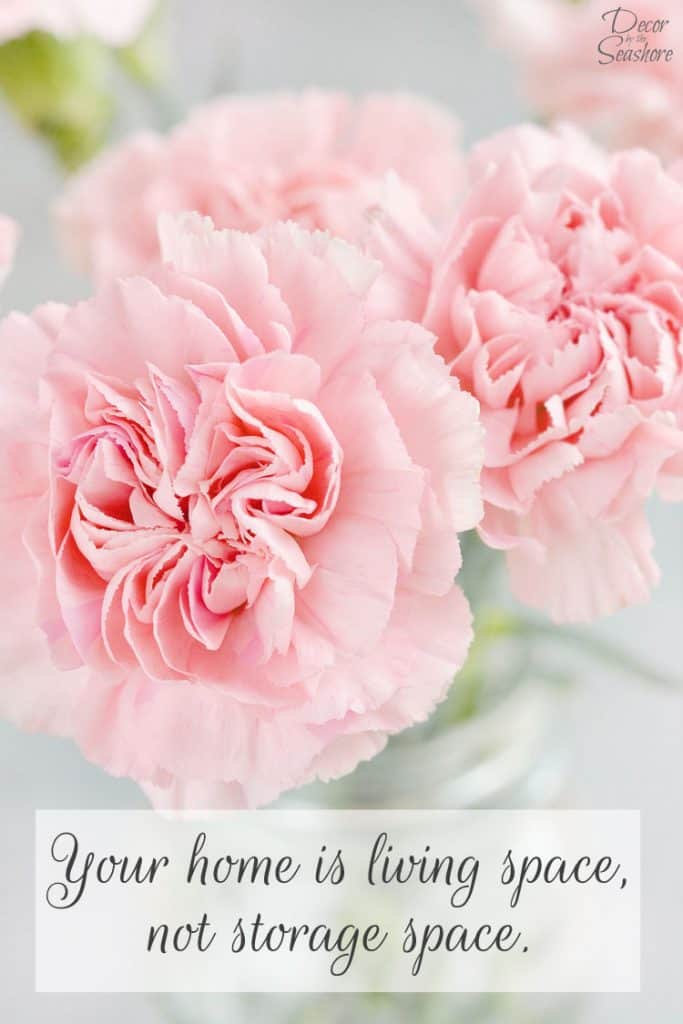 This is where the real work comes in–deciding what stays and what goes. Go through every item in your clutter-tossing zone and decide whether or not it is something you actually want to keep and use in your home. Let’s be honest here, the reason these items ended up in your clutter-tossing zone is because you probably don’t actually need and use them, so be ruthless!

If it’s not something you’re actually going to use, it needs to go! Don’t hang onto something simply because you might use it someday or it’s something you might want to have. Only keeping what you actually need and use in your home will help you drastically cut down on the clutter and mess. Trust me when I say it’s so worth it!

RELATED: How to Declutter Your Entire Home in One Weekend (or Less)!

4. Sort your items into sections.

You should have a separate bag, box, or pile for everything you want to keep, throw away, recycle, donate, and sell. Once you’ve made the decision as to whether you’re keeping or getting rid of something, put it in the appropriate spot. If you decide to keep something, you should have a plan as to where you’re going to store or place that item in your home so it doesn’t end up back in the clutter-tossing zone!

Donate or sell items that are in good condition. If they’re not in good condition, put them into the trash or recycle pile and move onto the next item. Keep going until you’ve sorted everything in your clutter-tossing zone.

Once you’ve finished sorting through everything in your clutter-tossing zone, it’s time to take action. Find a place for the things you want to keep in your home and put them away where they belong. Make a run to the landfill with things you’re throwing away and recycling.

Load up the car and head to the thrift store with your donations. List the items you’re selling online, or plan a yard sale. Don’t put this off, or everything will end up back in an unorganized mess in your clutter-tossing zone!

Once you’ve finished this, your clutter-tossing zone should be free and clear! Now make a plan for your new space to keep it from becoming a mess again. If you’ve cleared out a storage unit, make sure to properly close it out so you’re not still getting billed for it (and you’re not tempted to start filling it up again).

You might use the new space in your garage to park your car. A newly emptied basement or room in your house might be better used as a guest room, play area, craft room, or whatever other space you may need in your home.

It may take some time to go through everything in your clutter-tossing zone, especially if it’s a larger area. But in the end, it is completely worth it! There’s no reason to have an entire space filled with stuff you don’t ever use. Because that space could be put to MUCH better use! Your home should be full of living space, not storage space.

As for our basement, I had planned on having a yard sale for the majority of our stuff, but it never happened and I was just anxious to get the space under control before the baby came. So we ended up donating several carloads of stuff to a local thrift store.

We now have a nice, cleared out basement, and the thrift store we chose supports a lot of local charities. It’s nice to know our belongings will get a second life and benefit some worthy causes in the process.

Let me know in the comments where your clutter-tossing zone is and what you’re doing to tackle it. I know I’m not alone in this! If I can come clean about my basement, I know you can do it, too!

11 Comments on 5 Steps to Tackle Your Clutter-Tossing Zone 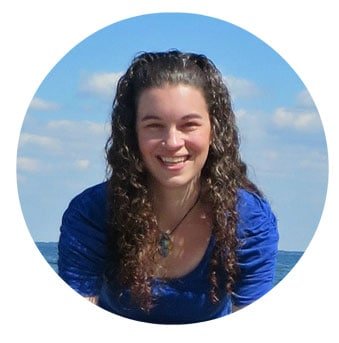 Hi, I’m Celeste! I’m passionate about helping you simplify your home so that you can live a clutter-free life. I truly believe that decluttering can (and will) change your life. 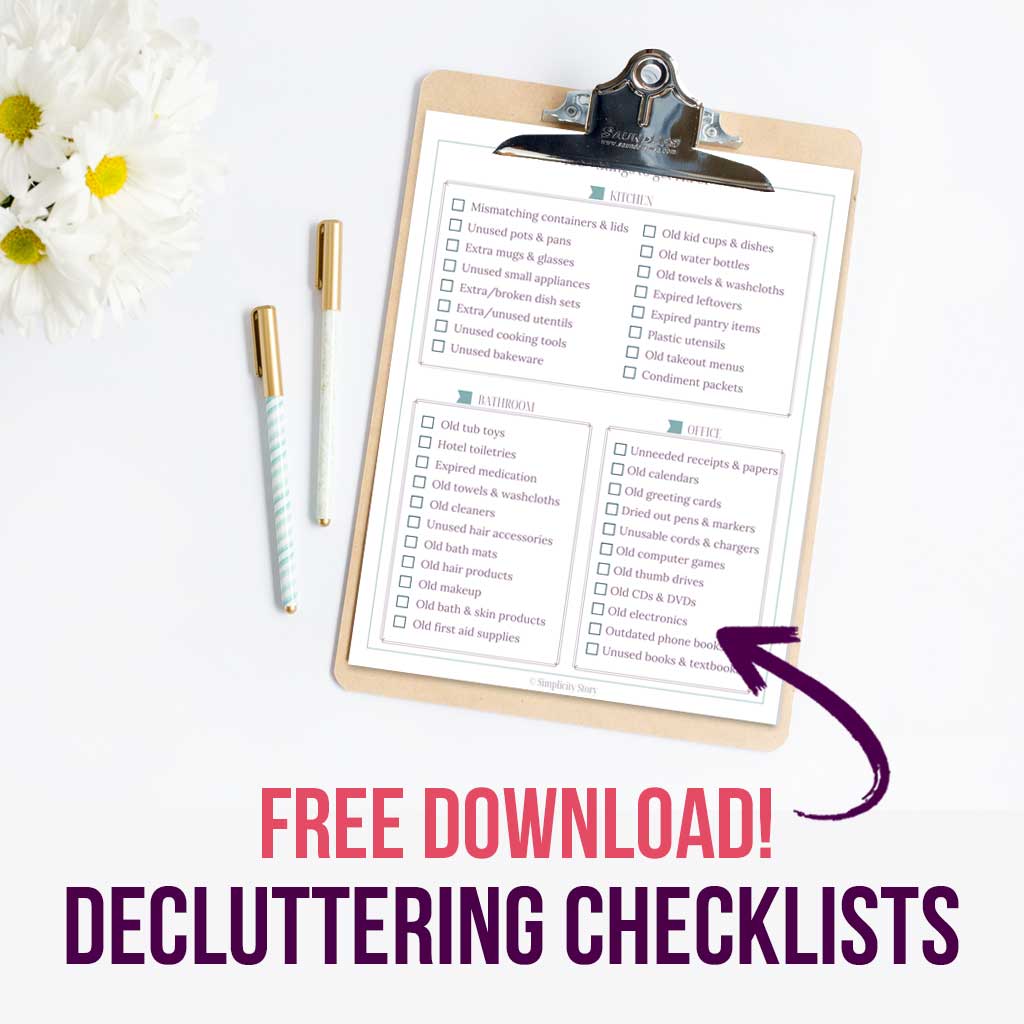 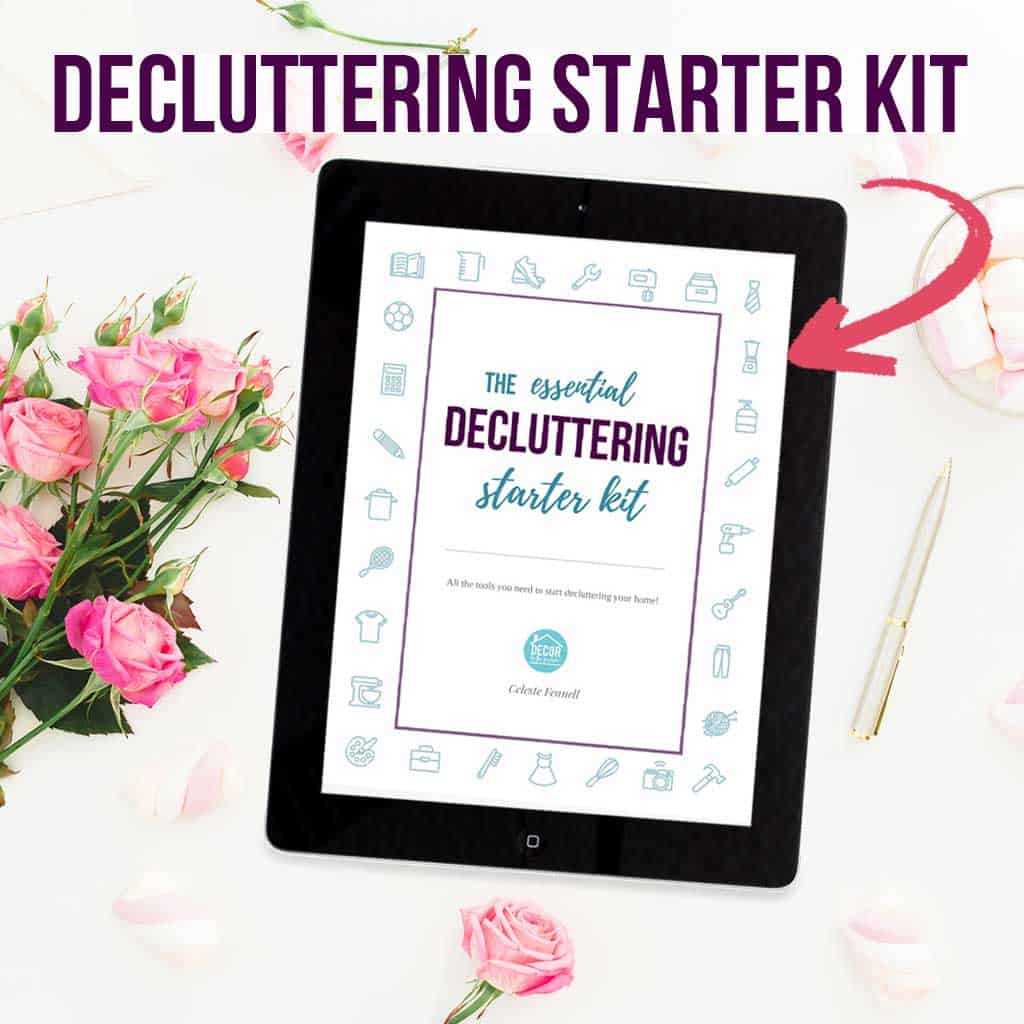 Decor by the Seashore is a participant in the Amazon Services LLC Associates Program, an affiliate advertising program designed to provide a means for sites to earn advertising fees by advertising and linking to amazon.com.

© Copyright Decor by the Seashore 2022. Theme by Bluchic.